The Personal Income and Outlays report shows people spent more than they earned in February. Consumer spending increased 0.8% from last month, but after taking price increases into account, increased by 0.5%. While disposable income increased by 0.2%, when adjusted for inflation, disposable income actually dropped, -0.1%. Personal income increased 0.2% in February. The personal income & outlays report is seasonally adjusted and annualized and covers individual income, consumption and savings.

Generally income isn't keeping up with spending, although 2011 saw a slight improvement from 2010. From the report for all of 2011, we see consumer spending increased faster than disposable income or even overall income when adjusted for inflation. 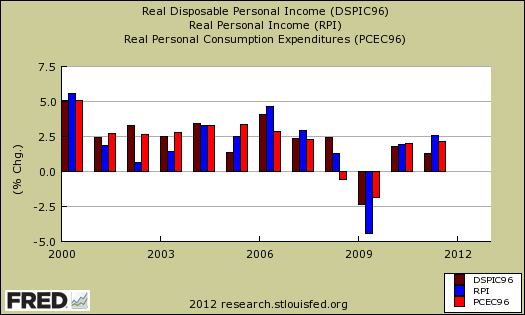 Consumer spending is not just smartphones and Starbucks. Things like housing, healthcare, food and gasoline are part of consumer spending. Consumer spending for the majority is spending to pay basic living necessities. Graphed blow is the overall real PCE monthly percentage change. Here's what people spent money on in February, adjusted for prices, or in real dollars. Health care, for example, is a service. Gasoline is a nondurable good. Cars, which people bought, are a durable good. People buying cars has been claimed to be most of the PCE increase for the last three months.

Personal income increased +0.2% in February and these numbers are the total for everybody in the United States who is reported and not part of the underground economy. Below is personal income, not adjusted for inflation, or price changes. Disposable income is what is left over after taxes. DPI (disposable income), increased 0.2%. DPI adjusted for inflation (see the price indexes above), decreased, -0.1%, from the previous month. These numbers are aggregates, which includes income of the uber-rich, or the 1% of the population, as they are now called. Below is real disposable income per capita. Per capita means evenly distributed per person and population increases every month. February mid-month the U.S. population was 313,441,000. In other words, while on aggregate personal income has increased, so has population to earn that income. It seems politically, any mention of the effects of population on aggregate data is a no no and dismissed. Disposable income, when spread across increased population growth and adjusted for inflation shows it's often worse news, which makes declines even more miserable. The numbers reported in the press headlines are aggregates, or the total, regardless of how many more people are in the country.

The monthly percentage change for wages and salaries was 0.3%, with total employee compensation, which includes wages, salaries, benefits, increasing 0.2%. Landlords made out like bandits, rental income increased 0.8% in a month. Personal interest income was zero, thank you Ben, and dividend income increased by 0.2%. This is income from non-incorporated businesses, such as the self-employed.

Government wage and salary disbursements decreased $0.2 billion in February, in contrast to an increase of $2.0 billion in January. Pay raises for military personnel added $1.8 billion to government payrolls in January. Personal savings is disposable income minus outlays, or consumption and not adjusted for inflation. The Personal Savings Rate was 3.7% in February. I'm leaving the opening sentence but by monthly percentages we see spending increase much more than income and it's true for all of 2011. That's why the dramatic opener to sum up the situation.