Before arguing against Robert Reich's antiquated theory on his pro-immigration stance, first allow me to give you a very brief history of immigration to the U.S. as it relates to population growth, and the major occupation that supported the livelihoods of most Americans during this time. That way, by putting everything into a broader context, you will have a much better understanding of just how new immigration will affect us today.

Excluding the indigenous peoples of the pre-Columbian era, the first people to actually migrate to what is now the U.S. were Europeans of mostly British decent, who settled in the East with African slaves. Then later, the Spanish came from the South as the French migrated from the North. By 1776 the U.S. population was a mere 2.5 million.

Shortly after the American Civil War the nation passed its first immigration law, the Page Act of 1875 (also known as the Asian Exclusion Act) that outlawed the importation of Asian laborers. By this time farming improvements in Europe and Russian created surplus populations that needed to move on. So the U.S. had another flood of immigration (the third major episode) with nearly 25 million Europeans making the voyage from abroad. This was about the time my great-father immigrated to the U.S. from Germany to be a farmer. As usual, young people age 15 to 30 predominated the newcomers.

By the 1890s, many Americans (particularly from the ranks of the well-off, white and native-born) considered immigration to pose a serious danger to the nation's health and security. The Ellis Island Immigration Station first began processing immigrants to the U.S. on January 1, 1892 --- when the population was 63 million.

As of 40 years ago the population had grown to 212 million, when only 2.2 percent of the population had lived on farms. Today the population is 316 million (which has been growing exponentially larger and faster since then) while less than 1% now claim farming as an occupation. With modern technology, we are no longer a nation of farmers...now we need jobs.

When I hear people arguing for more immigration (such as the esteemed Robert Reich) they always espouse how much immigrants have previously contributed to this country, and lists a host of examples. They remind us that we are nation of immigrants. Yes, my great-grandfather was an immigrant in 1870 and was a farmer. When a glass is only have full (like it was back in 1870) there were many ingredients one could add to concoct a wonderful cocktail. But that was then, this is now. As of today in 2013, our glass has runneth over. If my great-grandfather had wanted to immigrate to the U.S. today, he wouldn't be a farmer and he couldn't find a job.

While I agree with Mister Reich on many things, the topic of immigration is definitely not one of them. 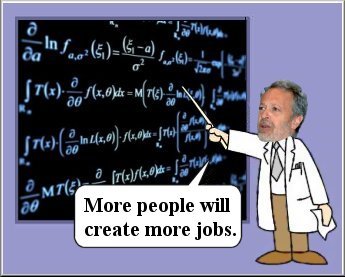 Does Mister Reich think (as the CBO has also argued) that additional people will create more "demand", forcing employers to hire more people? Modern technological production methods (automation and robotics), offshoring human labor with contract manufacturing to low-wage countries, importing high-IQ workers with H-1B visas, and forcing current workers to be ever more productive, has allowed our domestic business leaders / employers / job creators to do much more with far less, forgoing the hiring of millions of people already.

The 11.8 million unemployed Americans that are already currently jobless has NOT increased "demand" enough to a level that has boosted any significant new hiring (mostly temp jobs that pay low wages) --- and it hasn't for the past 5 years --- not since 2008.

According to a recent article in the Wall Street Journal, many Mexican immigrants are migrating back to Mexico in search of work --- and Virgil Bierschwale at Keep America at Work has noted that many Americans have sought out visas to find work in other countries (such as jobs teaching English).

So what makes Robert Reich think that by adding millions more to the U.S. labor pool will generate more job growth? How would giving away more work permits benefit 20 million Americans who are still unable to find full-time work? In reality, this could only drive down wages much further. We don't have a labor shortage, we have a labor glut.

And immigrants aren't necessarily doing jobs that Americans won't do. Only about 5 percent work in agriculture; 7 million are working in construction, manufacturing, transportation, retail and service industry. The majority of these jobs are already being done by U.S. citizens.

From Economists View, Immigration, Class, & Ideology (about scapegoating immigrants for taking jobs) he writes, "The effects of immigration take place in a class-divided society. For those in power, the benefits (high profits) are quick and easy. But for those at the bottom end of the labor market, they are less pleasant."

One person commented: "Whether people are brought here, or jobs are sent overseas, the goal from the businesses point of view is to shed externalities, the human costs which accompany human life. They want the frosting without the cake. They want human intelligence and effort without paying the cumulative price of those people. [The] tactic only works if there are multitudes of people so badly off in their home nations that wage slavery in North America is luxurious by comparison."

Mister Reich says, "The American population is aging rapidly..." --- but it's not just Baby Boomers getting older --- it's also real population growth. Over that last 40 years alone, since I was a senior in high school in 1973, through immigration and natural population growth, the U.S. population has grown by 33% (by over 100 million people) --- from 212 million in 1973 to an estimated 316 million in 2013 (according the U.S. Census population clock).

I have been studying population and environmental issues for over 25 years and have come to believe that for the U.S., for other countries, and for the world – the most humane and environmental tact is to help people where they are – not to encourage them to migrate. Migration to the U.S. increases our own very unsustainable and growing population level with its devastating local and global environmental impacts, takes pressure off of source countries to deal with their own population growth problem, and draws away from those countries the very people who are most likely to be leaders in their native lands to help improve conditions. Some countries have asked us, in fact, to better enforce our laws to help them better their own conditions. Population is the great multiplier!

Let's just look at recent statistics: The population grew by 7.5 million over the past three years and 3 months --- to 316.2 million as July 2013 from 308.7 million as of April 2010. Acting Secretary of Labor Seth D. Harris just reported 6.8 million net new jobs were created over the previous 3 years 4 months. This alone (to me) indicates that job growth isn't keeping up with population growth.

Just to maintain the currently high unemployment rate, we would need to create 107,096 jobs a month (according to the Atlanta Fed's job calculator). Also read Robert Oak's post regarding job growth and population growth at the Economic Populist, where he puts all this into a different perspective, and says that job growth IS currently keeping up with natural population growth --- a population that's also been exponentially growing with past immigration. He explained to me that, just population growth alone doesn't fully explain the complex and complicated demographics involved in calculating job growth.

Last month we created 195,000 new jobs. According to the Atlanta Fed's job calculator, to get the unemployment rate down to the December 2007 pre-recession level of 4.7%, we would need to create 195,000 jobs every month for the next 52 months --- or 2.34 million jobs a year. (I don't know if the Atlanta Fed's job calculator includes new immigration.)

Over the last year our business leaders / employers / job creators created only 1.8 million net new jobs while we just had 3.4 million high school graduates in 2013 (and that's not even counting high school drop outs or new college graduates...or new immigrants that have yet to arrive here on new guestworker visas.

Mister Reich says, "There will be only two workers for every retiree by the year 2030." But I could guess that at the current rate of population growth vs. job growth, why should we be surprised if we eventually have only one worker for every five retirees? And that's not counting the disabled and long-term unemployed.

Because of over-population, in 1978 China introduced their one-child policy to alleviate social, economic, and environmental problems. In the U.S. the Republicans are trying to outlaw abortions altogether, while the Democrats are encouraging more immigration in general, as the GOP is also pushing for more guestworker visas. According the CIA World Factbook, China has a work force of 798.5 million with an estimated unemployment rate of 6.5% --- while the U.S. has a work force of 156 million with an unemployment rate of 7.6% (That's just one of many reasons why I'm also against U.S. companies offshoring jobs to China).

It's one thing to debate a resolution to resolve the dilemma of 11 million undocumented immigrants that are already living in this country. It's an entirely different issue to argue for "more of the same" and add more immigrants to an already over-saturated and under-paid labor market. Flooding the labor force will only dilute the job pool further. And more immigration (with natural population growth) will only exponentially grow the labor force that much more, where the demand for jobs will further overwhelm the number of jobs currently available.

They believe they will lock down political power by passing this, I doubt it. The polls show Hispanics are demanding "unlimited migration" but thinking if they pass this, somehow Hispanics will vote for life Democrat is a mistake.

What they fail to miss is the great immigration waves of the late 1800's allowed industrialists to exploit workers to no end. Instead of streets paved with gold, there was such an oversupply of workers it took 80 years to get worker rights and higher wages, no child labor, better working conditions.

It is no fluke most of labor rights happened after immigration was severely curtailed for businesses needed workers and there was no ability to import cheap labor.

If immigration grew the economy and it is incredible, for labor economics, the mathematics does not back up that claim, it is the opposite, then obviously we would have a booming GDP by now and have higher wages.

Instead we have wages so low most people cannot buy enough food they need, never mind have disposable income.

As far as this claim of "aging population" I'll have to look at that but I'm not sure that's true today, it was 10 years ago, but due to the already massive influxes of immigrants there are many babies. I'll have to break down population by age to see if this is true today.

Reich also ignores education and skills. It is not just babies, but in the past, the educational system of this country plus the labor conditions gave new workers higher earning ability and that affects paying into social security, taxes. That is not true today, so increased young population does not mean better workers and more money for social security necessarily. It probably does mean more low wage workers to be nursing aides.