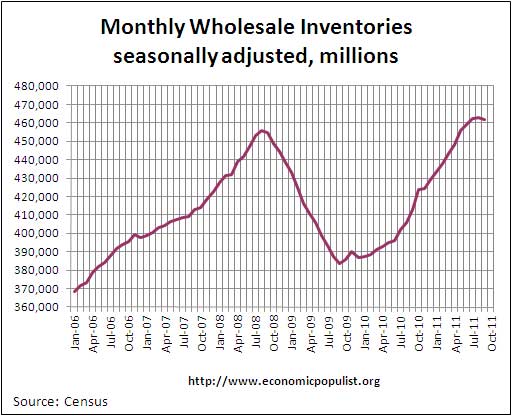 The above graph shows the deceleration in inventories during the Great Recession and a return to 2008 levels, but now a change in direction, a minor deceleration. This is good news. Businesses add to inventories when they believe their sales will increase, although sometimes they have not adjusted inventories to sales decreases, as we saw in 2008 (see sales/inventory ratio below).

The change in inventories are part of GDP growth. If you make things, even if they are sitting around in a warehouse, this represents economic activity. Q3 2011 GDP was attenuated by a deceleration in inventories.

, provided by the Commerce Department.

Regardless of dragging down GDP numbers, inventories have little to do with real demand in the economy, more an indicator of expected demand.

More details from the report: