This next table compares the change in Q4 revisions from the real GDP percentage point contribution spread perspective. 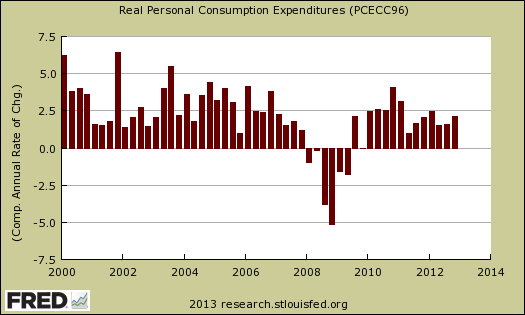 Imports and Exports, M & X are greatly revised as expected from December's trade deficit plunge.  Exports grew more than previously estimated but imports imploded, which helped the U.S. economy.     The below graph shows real imports vs. exports in billions. The break down of the GDP percentage change to point contributions gives a clear picture on how much the trade deficit stunts U.S. economic growth. This was businesses contracting their inventories, and that's a really bad sign on how much demand they see for their products in the future. Non-farm changes in inventories hacked off –1.70 percentage points from Q4 GDP growth and this reducing inventories on hand for industry can be blamed for D.O.A. economic growth.   The drought is over as farm inventories added 0.15 percentage points to real GDP.

Fixed investment is residential and nonresidential and is a another bright spot in the Q4 GDP report.  Overall, fixed investment contributed  +1.36 percentage points to GDP.  Residential fixed investment was +0.40  percentage point contribution to Q4 GDP.   One can see the housing bubble collapse in the below graph and also how there is no meteoric recovery for Q4, in spite of all of the housing data hype.  Residential real estate is adding to economic growth, but it is not the bubble years econmic driver some are claiming.  That's a good thing, after all, bubble economies eventually pop. Motor Vehicles as a whole, as output,  was 0.19 percentage points of Q4 real GDP.  Computer final sales, contributed to GDP by 0.10 percentage points.  These categories are different from personal consumption, or C sub-components, such as auto & parts. These are overall separate indices to show how much they added to GDP overall.  Motor vehicles, computers are bought as investment, as fleets, in bulk, by the government, as well as part of consumer spending, government spending and so on.

The price index for gross domestic purchases, was 1.5% for Q4 in comparison to 1.4% for Q3.  This means there was  inflation was on par with last quarter.  Also, the price index was revised upward by 0.2 percentage points.  Since the price index is used to remove inflation from GDP to obtain real growth,  it seems we had more price increases than real economic activity than previously thought in Q4.  Core price index, or prices excluding food and energy products, was 1.1% . Here is our overview for Q3 GDP previous estimate, here is the overview for Q4 GDP advance report. Other reports on gross domestic product can be found here.

After number crunching our overviews, I often read the main stream media's take, or lack thereof.

I'm seeing apologists trying to claim Q4 and Q3 GDP are pretty much the same. Uh, no, they are not. Just because inventories increased 0.73 percentage points in Q3 does not negate Q4's -1.55 percentage point plunge. Anyway you slice it, that's bad news and anyone claiming consumer spending is so hot is also not in historical reality. Think about the fact there are more people in the United States, and while GDP is adjusted for inflation, it is not presented per capita.

Finally, the cuts to defense spending, all services, are a shadow of what is about to happen due to Congressional ineptitude.

While there is clearly investment and spending happening, there simply is not enough demand in the economy.

Bottom line, it sure looks like the biggest drag on the economy is Congress and that isn't going to change anytime soon.

Years from now the obvious will be stated - there was no recovery. And now with consumers disappearing as people can't buy anything as more and more jobs are destroyed/lost, the people in entire sectors will find that there are only so many Lear Jets and Tiffany rings the 1% can buy and it really does matter if 99% of the population don't have living wage jobs. HR, marketing, sales, real estate agents, health (because the unemployed and poor don't visit doctors or buy needed medications) will all suffer and will be among the people they viewed as somehow being damaged because they were "unemployed." US Government and 1%er talking points - meet reality, we've been here awhile, welcome to the club. And when more and more people can't buy goods and services and join the ever-growing unemployed ranks, they too will start railing against Bill "The Unemployed are all Lazy Bums" O'Reilly and MSNBC "Green Shoots are Everywhere" and start to question the American Dream and corporate government.

There is no recovery, it never started. We're in a Depression, both economic and far worse, a deeply social/political one that is tearing this country apart and destroying American citizens all in the name of money and power by a small group of people and companies. The groundwork was laid years ago in free trade and financial deregulation. Their puppets will join the unemployed and suffering, and then the fun really begins.

A recession is defined as two consecutive quarters of contracting real GDP. That said, it's very clear increased productivity, economic growth is not translating to the U.S. worker.

Okun's Law is basically a ratio of the unemployment rate to GDP, but it is potential GDP, not actual.

I did a graph of it here and am looking to do a big picture annual GDP to employment to wages type of article soon.

Beyond the fact that the U.S. is not generating enough economic growth to really create jobs, there is another element which I think is completely ignored by not just politicians but most economists. That's globalization. It's pretty clear with India having outsourcing be such a large part of their GDP, plus the employment levels in both India and China, foreign workers being the growth "area" for actual U.S. employment, this is really hurting the U.S. worker.

That said, technically we are not in a recession, although I think it is highly probable at this point Congress will throw the U.S. back into a recession.

I think for anyone to be elected to Congress, they should be required to pass a basic economics test as well as a basic math test. See the overview of Bernanke's testimony where it is a true horror to watch these people. That's what is wrong, we cannot even get basic economic theory recognized by way too many of these politicians. How can one legislate when they cannot even get basic laws of supply and demand through their thick skulls?

The House of Representatives has proposed budgets for the last 2 years & sent them to the Senate for a vote. Senator Harry Reid refuses to have vote.

Meanwhile The Democrat Party has yet to formally propose a budget.

"Think about the fact there are more people in the United States, and while GDP is adjusted for inflation, it is not presented per capita." that comment is the truth.

But Obama has no responsibility here? Really?

Over time, Congressional leaders, Obama are proposing insane economics. It just happens to be the latest insanity is Congress. They push lobbyist written corporate favors and are hell bent in further middle class destruction.

It does not matter who is to blame for they all are and now they are sending the economy into the tank over their absurd politics which demand they harm the U.S. economy. EOM.

END_OF_DOCUMENT_TOKEN_TO_BE_REPLACED

A Brief History of Securitization - 47701 reads
Why So Little Self-Recrimination Among Economists? - 49040 reads
Flight-to-safety crowd lost big this year - 6270 reads
In defense of securities and derivatives - 11617 reads
Sunday Morning Comics - The Golden Calf Edition - 10748 reads
President Obama Takes Another Body Slam - 22996 reads
Federal Reserve Slashes Debit Card Transaction Fees in Proposal - 8616 reads
Site change, Blog posts must now be promoted to front page by users - 59529 reads
Saturday Reads Around the Internets - Government Complicit in Libor Mess - 9015 reads
Subprime Culprits Get $21 Billion to "Refinance" Mortgages - 13684 reads
Will the NY Attorney General Bring Doomsday Charges Against Wall Street? If So, How Long Will He Survive? - 1182950 reads
New York Post Claims Census Falsifies Unemployment Figures - 897578 reads
Safeway Skewered for Throwing 6,000 Workers Under the Bus in Video Parody - 396674 reads
How Many Jobs Are Needed to Keep Up with Population Growth? - 284793 reads
VAT or Value Added Tax is Getting a Look in D.C. - 279244 reads
U3 and U6 Unemployment during the Great Depression - 272317 reads
Tax Cuts for the Rich Do Not Generate Jobs - 258027 reads
House discusses 401k/IRA confiscation - 255379 reads
Delusions of Normalcy 2011 - Dismal Scientists Cheer Up - 245359 reads
The war on the middle class - 243838 reads