It's like someone pulled the unemployment rate out of a Star Trek transporter, as if America entered a time warp machine and we moved to another dimension through a worm hole. A 0.3 percentage point drop to 7.8% makes no sense when there were only 114,000 jobs added. Captain, can the unemployment rate be right and we really did defy the laws of statistics?

We want to point to something which might in part explain what happened this month with the household survey statistics. That is how long someone holds a job. We don't have monthly statistics on job tenure, yet it could very well be that finally, people are working longer at a job. The never ending Schindler's List attitude towards U.S. workers may have abated. The U.S. has disposable worker syndrome, where people are laid off and fired for no damn good reason at all. It's a fact of the American work life while one has a job one week, there is no guarantee one will have a job the next.

To wit, let's look at another obscure BLS statistic, labor force status flows. This is the number of people flowing from being in the labor force, out of the labor force, employed and unemployed on a monthly basis. Below is a graph of the monthly changes of people who moved into employment from already having a job, not being counted at all, or being part of the official unemployed since 2006. 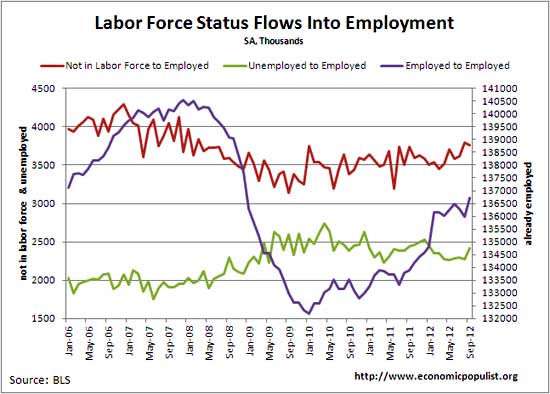 There are some absolutely ridiculous articles on the July jobs report. Some are proclaiming the economic slowdown is over, which is absurd on it's face. One cannot conclude that from one month of payrolls data which will probably be revised.

The June employment report was crappy and not enough jobs to keep up with population growth. This overview shows the situation is even worse than what is typically reported. Officially there are 12.75 million people unemployed and the unemployment rate is 8.2%.

The June 2012 BLS unemployment report is another abysmal jobs report. Total nonfarm payroll jobs gained were only 80,000. May's payrolls were revised up, from 69,000 to 77,000. April job gains were revised down, again, from 77,000 to only 68,000. The below graph shows the monthly change in nonfarm payrolls employment.