What was the point of Romney's statement in the debate?   The point was there are plenty of qualified women for high level jobs and it is up to employers to go out, find them and hire them.   Frankly he's right.   If you want to fix income inequality for women in this country, one must actually hire a woman for the job!   What's so controversial about that?   The bottom line for income inequality is this, do people put their money where their mouth is? Do employers hire women, give women opportunities and promote women into powerful positions?   Words are cheap, paychecks are real.

To show how cheap words are, lets point to some really startlingly statistics based on gender. It seems, single mothers really get the economic shaft.

Having children without some guy around seems to be the economic kiss of death and what does that say about discrimination against women, especially single mothers?

The poverty rate and the number in poverty for related children under age 6 were 24.5 percent and 5.8 million in 2011, not statistically different from the 2010 estimate. About 1 in 4 of these children were in poverty in 2011. More than half (57.2 percent) of related children under age 6 in families with a female householder were in poverty. This was more than four and a half times the rate of their counterparts in married-couple families (12.1 percent). 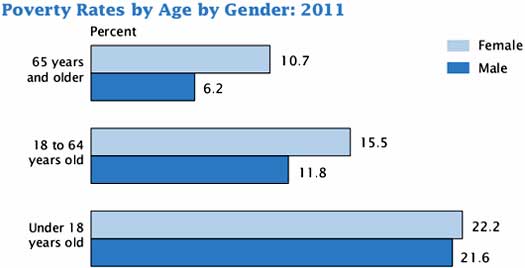 In 2011, 16.3% of women were in poverty in comparison to 13.6% of men. That same year, 31.2% of families with a female householder are in poverty in comparison to 6.2% of married families and 16.1% of a male householder. Jobs since the recession show a much deeper loss for men (blue), but for women (maroon), we see they are simply not gaining at the same rate as men are in payrolls. 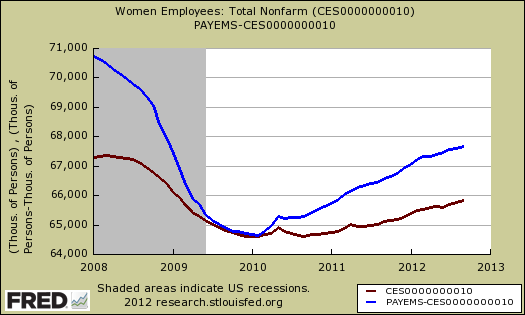 While these statistics are appalling it is expected that the Obama administration will bring up more sex discrimination cases.

The EEOC has pursued numerous high-profile enforcement initiatives during the current administration, and employers should expect those to expand during a second Obama term. Chief among them is aggressive investigation – and litigation – by EEOC of “class” and “systemic” discrimination claims. These involve claims brought by the EEOC itself on behalf of groups of employees, rather than a claim brought by an individual employee after investigation by EEOC.

Yet, there are so many other policies that are being neglected to really obtain economic equality for women and those are not mentioned on the political stage. Clearly we have hiring discrimination against single mothers from the above statistics and we have little outside help support for families with children generally.

This leads to another issue, the idea of turning our universities into green card ATM, otherwise known as stapling a green card onto diplomas of every foreigner who flashes a some sort of degree in the Science and Technology fields. Not only will this be a disaster for Americans who work in these areas, it will also corrupt our higher education system. Such a corporate lobbyist wish list agenda will also squeeze out further U.S. citizens wanting to study STEM from even getting into college. Yet the flooding of U.S. labor markets with more imported labor, something which both Obama and Romney spew lobbyist written talking points on, ignore discrimination against women.

Make no mistake, the excuses to not hire women in advanced R&D, Science & Technology jobs are many, including the galling practice of biasing technical interview questions. Bottom line, the more scientific and mathematical the career goes, the more stuck in the 1950's it is and the less women one will see in those fields. The dearth of women is not due to a lack of binders full of women for these jobs, it is discrimination, simple as that. Discrimination against women is buried under a layer of global labor arbitrage, yet there the ladies are, a talented, innovative workforce denied.

We have statistical denial even though 52% of women drop out of their STEM careers. Hostility is quoted as the reason women leave graduate school. These are statistics for those who managed to tough it out and get opportunities in the first place. Lord knows how many more were never even let through the door. Imagine how much worse sexism will be by importing more male foreigners, giving more slots in college to predominately male foreigners and more guaranteed jobs to male foreigners?

President Obama also has a fact problem. In the second debate he claimed outsourced jobs are not coming back because they're low-wage, low-skill jobs.

That is a fallacy. In fact the high paying jobs are the ones being offshore outsourced with advanced research and development jobs leaving in droves. It's not due to the lack of qualified personnel in the U.S. We have the best universities and training in the world for STEM and many of these people are women. What is coming back are low paying jobs. Most new jobs are in fact low paying ones.

If any politician really wanted to bring back high paying jobs, they would not only give a tax refund for companies who hired here, but they would go after those businesses discriminating against U.S. citizens, older professionals and U.S. domestic diversity STEM. That's blacks, Hispanics and ...women.

By binders or blunders, the bottom line is not only does the United States need U.S. citizens preferred in all hiring, they need to go after discriminatory employers and that....just might be that great political donor class of the sky, corporations and especially technology companies.

Thank you for this post. As is evidenced by the lack of comments since you posted it on the 20th, Those commenting the most on the internet, are not familiar with (or choose to ignore) the fact that women, particularly those nearing and over 30ish, have never been close to equal standing, economically, with males. Nor do most internet commenters appear to be concerned with the reality that "post racism" is a also a blatant lie.

And, truth be told (witnessed first hand in the San Francisco Bay area), most of the "successful" gay rights movement was all about worshipping the ‘male topper’ (whether that ‘topper’ was biologically male or female, the media absolutley focused on those biological males though) and economic savings (for those who make plenty money: for married filing jointly to have a significant savings effect) aspect of it, 'just folks' (and their millions) like Gopper, Peter Thiel, and the right to drone and goose step into 'third world' countries,....and save money on those 1040s; nothing equated with nurture, ....or any other positive aspect historically equated with a feminine slant, let alone there being no connection with those positive qualities associated historically with a masculine slant.

Thank you for your effort though, it is very admirable.

The point of this post is how there is massive discrimination and what few realize is most foreign guest workers are male and Americans generally are being displaced. I have no idea on the gay community for their economic demographics, I've never actually seen. I would imagine Lesbians are the bottom of the economic pile, just going off of discriminatory behavior in the U.S.

But frankly while it's ridiculous, one can go buy a packet of birth control pills out of pocket and what is that? $150 for the clinic to get the subscription and then ?? $30 to get it filled...

that's no comparison to throwing millions of women into poverty, acting like their careers and economic livelihoods can be answered by "getting a man" and especially the brazen discrimination against single mothers is a topic untouched, obviously.

In other words, the $$$ trumps funding for planned parenthood in terms of efforts women need from the government. Liberals can talk a great game, but do they HIRE women as employers AND put them in the highest, most powerful positions? That's the real test.

Yes, it does appear that females are, still, not even on the ‘totem pole,’ ...particularly those who are raising the ‘new’ generation ...by themselves.

But it is not about wanting to be Meg Whitman or Carley Fiorina (both of whom, as a female myself, I consider a disgusting disgrace on the face of the profound side of Humanity (which isn’t a fable), it is about being able to survive when one’s efforts are benign and, for the most part, well meaning and productive of a beneficent way of living.

And just to clarify, Robert, as I’m not totally clear on how you deciphered it, when I mentioned Racism. I was referring to those born here, by parents who were: force shipped here in the 1800’s; already here before Europeans; tempted/coerced here, in the 1800’s and early 1900’s - to either live “illegally” or as virtual slaves needed to run rail for the choo choo, etcetera (which did, of course, also include “White Trash”).... - sans Visa; versus the A through Z (A1 through Z-3) VISA!!! categories that reside on that “US” State Department ™ website (if one takes the very necessary time it requires, to dive beneath the surface .and realize that historic bipartisan affair of importing both: ‘third world’ workers who are used to acting like slaves (who are used as a weapon against the workers in the Land of the Free ... ™, and therefore replacing those totally deceived, Liberty/Freedom raised ™; and those of the upper echelons of those third world communities with plenty money, who may prefer to run over pedestrians in their Mercedes and Teslas, in that Mediterranean climate of Cali, versus the (more humid?) climates of China and India, etcetera... ...and realize ..that a stunningly teeny group of insatiable beings (not to be confused with the millions of ‘sheeple,’ who lick their asses) control the well being of those in the us ...every bit as much as they control the well being of those in other countries.

(Thank you again, for bringing the “feline” subject up, Robert.)