Q3 2013 real GDP came in at 2.8%  Changes in business inventories saved the day as did less of an increase in imports.  Fixed investment also increased.   Government spending declines were about the same as Q2, yet local governments increased spending.  Consumer spending was less growth than Q2, only about 37% of this quarter's GDP.  Generally speaking, don't expect a 2.8% Q3 GDP to last as it is common for imports especially to be revised as more trade data comes in.  Another factor to consider is the sharp jump in the price index which is used to remove inflation from the GDP figures.  Q2 GDP was 2.5%. Imports in the past have been notorious to be revised upward significantly.  The September trade data has not been released and is thus estimated for this advanced Q3 GDP estimate.  The shutdown also delayed the release of the September trade figures.  Finally, the way GDP is calculated was significantly changed and the link reviews these changes as well as the validity of them.  As if the validity of GDP is in question isn't enough, there is an agenda to classify offshore outsourcers as domestic manufacturers.

Below is a graph of import revisions.  The blue, and red represent the real imports after the major changes to the way GDP is determined, overviewed in the above link.  Each color represents the value of real imports on a particular release date of the GDP report and as we can see, generally speaking imports are revised significantly between the advance GDP estimate and the next revision.  This is why one shouldn't bank on imports continuing to save the day for Q3 GDP. 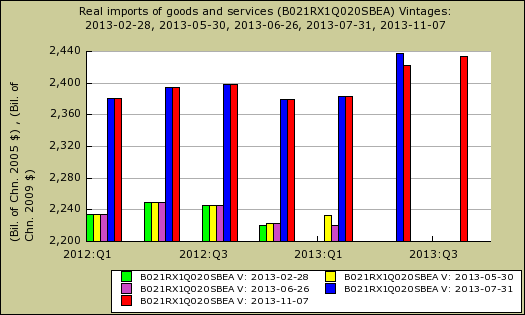 Part of fixed investment is Residential fixed investment. Residential contributed +0.43 percentage points to Q3 GDP.  One can see the housing bubble collapse in the below graph and also how there is no meteoric recovery in terms of economic growth, but a modest one, for the last three quarters, in spite of all of the housing talk . Still, almost half a percent added to GDP growth ain't too shabby and shows how the residential real estate market impacts overall economic growth. Nominal GDP:  In current dollars, not adjusted for prices, of the U.S. output,was $16,857.6 billion, an 4.8% increase from Q2.  In Q2, current dollar GDP increased 3.1%.  This goes to show what a difference the price deflator makes in real GDP.  All figures are annualized. Gross domestic purchases are what U.S. consumers bought no matter whether it was made in Ohio or China.&nbsp ; It's defined as GDP plus imports and minus exports or using our above equation: